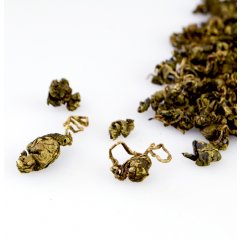 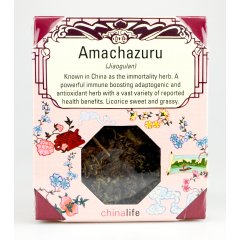 Amachazuru is known in China as simply the immortality herb because of its reported effects on the strengthening the cardiovascular, immune and detoxing system, its reported anti-cancer properties and energy boosting effect. This tea contains over 50 kinds of panaxosideo and 20 different amino acids and trace elements.

Here is why Amachazuru is known in China as simply the IMMORTALITY HERB:

CARDIOVASCULAR - It may have a strengthening effect on the heart, reduces the build up of plaques in blood vessels that may lead to heart attacks or strokes and widens blood vessels - which lowers blood pressure. Some evidence suggests that it may lower cholesterol levels in the blood.

PROTECT LIVER - The antioxidants help to protect the liver from damage caused by alcohol or other toxins and reduces the development of liver fibrosis – scar-like fibers which inhibit good liver function.

ENERGY - Amachazuru has been used by the people in the mountainous regions of Southern China as an energizing agent. They would take it as a tea before work to increase endurance and strength, and after work to relieve fatigue. It is a rejuvenating elixir similar, if not superior, to Ginseng.

To brew Western style use 1 heaped teaspoon for every 350ml of water. Place tisane in a spacious filter and infuse in boiling water for about 1-2 minutes. Remove tisane from water to prevent stewing and save them for up to an hour to re-infuse. The temperature of water depends on the type of tisane but generally nearly boiling water is suitable for most tisanes.

To brew Gong Fu style use 2 heaped teaspoons per 200ml of water and reduce your brewing to 15-30 seconds. The brew will become richer and release its flavour in stages for your enjoyment. You are not wasting the tisane because you can reinfuse the tea many times, just add about 10 seconds extra for each infusion.

Slightly bitter to start but leading to a sweet licorice like finish.

Regular consumption increases the body's energy and resistance to illness. 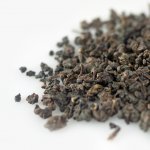 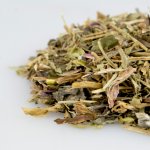 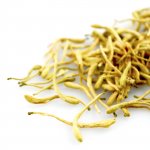 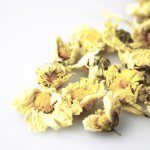 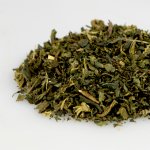 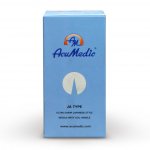 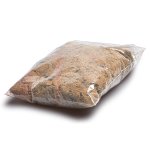